They Say It’s the Journey and Not the Destination…

Sunday morning was a frantic race to hit the store for a few last items I needed (travel-size toiletries, Claritan, petty cash, etc.) and radically indulging my OCD by repeatedly making sure I packed all of my stuff (by my count, I only rearranged it all three times) and everything my two friends on housesitting duty needed were squared away. The weather was chilly and rainy and Dulles International Airport was relatively quiet as the first few of us showed up at the Air France ticket desk (it was noon on a Sunday after all). My first conversation with one of my travel mates was with someone I really wish I hadn’t made eye contact with…ever. Not that he struck me as a “bad” guy, just awkward and definitely creepy with his cold, dead-eye gaze/stare. It was kind of look characteristic of someone sizing you up to decide if you’re a valuable asset or to be dismissed as a worthless acquaintance. Waiting in line to check baggage and get boarding passes, he attempted to strike up conversation:

* In truth, adrenaline was kicking into high gear thanks to all of the anticipation and excitement, and it took in a glass or two of wine (okay, it was two, plus an after-dinner cognac) on the flight to help settle myself down.

Creepy Guy ended the conversation with a grunt that I’m still guessing passes for acknowledgment of my last comment and he eventually waddled off* to go through security and head to the gate. I discovered later on that he is not a popular member of the wine group, mainly due to his almost nonexistent social skills, semi-rude behavior, and a history of possibly stalking some members. On top of this, he apparently loves guns and is given to ultra-conservative points of view. In any case, he happily disappeared at the airport and I didn’t see him again until we landed in Paris. We passed through security far faster than anticipated, so with a couple hours to kill before the flight, we spent some of it watching football in an airport bar attended by a female bartender who barely spoke English and took forever to refill drinks (and no, the bar was not that busy).

* I’m not joking, he actually waddles. Well, maybe more of a shuffle at other times.

One big perk of the trip was flying to Europe in an Airbus A380. I used to work for Omega World Travel a few years ago, and remember reading when the plane was first put into service. To see one parked at the gate and then go inside it really makes you appreciate its size and surprisingly comfy interior (even for coach). I love how each passenger has their own video screen to view whatever movies, TV shows and/or play video games are in the plane’s database.*

* I treated myself to “Thor” which wasn’t too bad, but could only get through a third of “The Hangover Part II” because honestly, it’s a really disappointing movie. 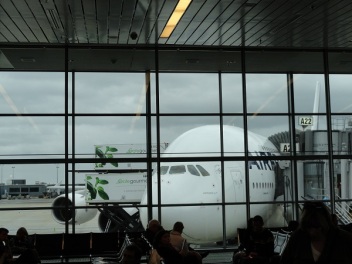 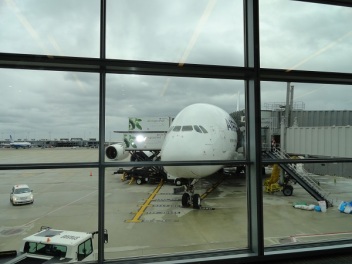 The Airbus A380 – pictures do not convey just how big this plane is!

Unfortunately, I didn’t get a single wink of sleep on the flight due because of two children in the front of my section. I don’t know if they were just brats or having a hard time with the air pressure changes, but they were prone to screaming and wailing every 20 to 30 minutes (the Mom tried to keep them quiet, but it didn’t help much). It made for a very long flight, with or without headphones on.

We arrived at Charles de Gaulle Airport in the wee hours of the morning, walked what felt like forever to get our bags (CDG seems to enjoy putting baggage claim as far away from the gates as possible) and even further to get to the airport’s train station. Like the Airbus, you really don’t appreciate how big CDG is until you’ve walked through it. Europe seems to be a week ahead of the weather on the East Coast, so France was still warm and sunny (it was well into the 80s by noon). Once en route to Bordeaux, we only had so much space to stow luggage on the train, so some of us had to shove bags in other cars, or eventually move them into our section via some superheroic reorganizing.* We had first class seats on the train, and took advantage of this to spread out and relax a little, even finally getting in a few catnaps. The train ride offered plenty of exposure to the Paris suburbs (which seemed to go on forever), and tremendous views of rural, southern France. Cornfields, small villages and vineyards as far as the eye could see zipped past us as we headed south.** When not sleeping or reading, a few of us either couldn’t help it or seemed prone to telling dirty jokes – which seemed to be a good bonding experience.***

* Considering how tired we were, this really was a Hell of an achievement.
** Someone told me you see similar views at the California vineyards – rolling hills of vines that go on forever. I need to see this for myself.
*** The fact that a few opted for some half bottles of wine from the food car may have been a contributing factor. Though the few French passengers sharing the car with us didn’t seem to appreciate it.

Seven hours in a plane plus four more hours on a train after that, we arrived at Bordeaux! After a brief bout of confusion over finding the train station’s information desk and then the tram (above ground light rail) station (which was naturally, directly in front of the train station), we arrived at the hotel, looking like the better part of a tired, hot mess.

Beyond travel guide reading, Wikipedia research and Googling on the Internets, I really didn’t know what to expect about Bordeaux. On a map, it doesn’t look very big, and relatively speaking, it isn’t, but its combination of French/Spanish architecture, narrow streets, wide main avenues and open squares made it feel like a magnificent, old world maze. Part of the travel package included a week-long pass on Bordeaux’s tram system that takes you all over the city. The tram system was installed in the early 2000’s and the way the tracks are laid down, people walk across the tracks as long as a train isn’t passing by (this felt strange compared to U.S. metro/subway tracks that are often designed to keep people from crossing them due to their third rail power supplies). The tram took us from the train station in the center of town on the west side (or “left bank”) side of the Garonne River, across the Pont de Pierre to the east side (or “right bank”), near our hotel. The first thing you notice about Bordeaux is how walkable it is, and thanks to the tram system, getting across the river in downtown Bordeaux was little more than a 20 minute walk from our hotel. I seriously doubt you need a car living in the city, and it was actually faster and easier at times to walk to the downtown instead of waiting for the next tram.

We bolted to our rooms at the hotel to take badly needed showers and rest up a bit (One person in our group joked that we were staying in a landlocked cruise ship given how small the showers were).* The hotel is in what’s considered the lower side of town (more like a slightly rundown “main street” area, complete with university housing next door and an old, abandoned industrial train station). This part of town is going through a beautification project, though I didn’t think it looked that bad. Around mid-afternoon, several of us went over the river to get our first look at the downtown/quay area, complete with a good look at the Grand Theatre, the riverside, Place de la Bourse and Esplanade des Quinconces. Walking around the city, a few of us noticed how – on average – the people there were thinner** and to be honest, fairly attractive (as well as mostly being around my height). Also, I noticed how, for being in the middle of a city, it was relatively quiet compared to U.S. metro areas. Not a single car passed with the radio blasting and there were very few honking horns.

* Not being a particularly large or tall person, even I felt a little claustrophobic in the shower, which was a little more than shoulder-width in size. I can only imagine how taller and larger people may have felt in there.
** Given how Europeans eat better diets than the average American, and how much more people walk around Bordeaux, the reason for this isn’t a big stretch of the imagination. 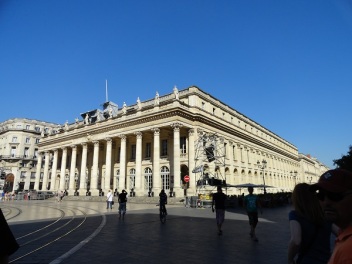 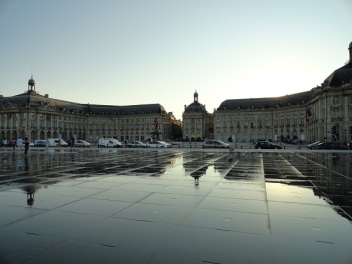 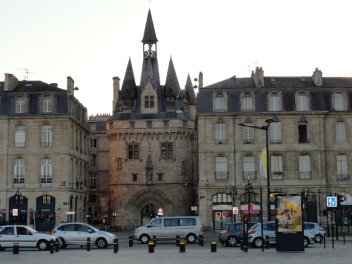 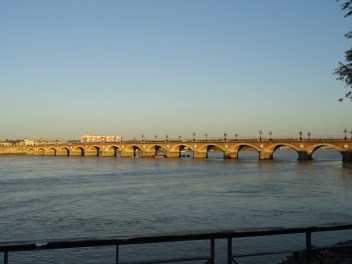 By early evening, we were all getting pretty hungry, only to discover that most eateries didn’t serve dinner until after 7:00 PM, so we stopped at one place for a snack over a happy hour and went back to the hotel. One saving grace we had at our hotel was a grocery market next door that carries everything from fresh produce, to lawn furniture, to lingerie. The hotel offers a meager breakfast of assorted breads and coffee, so many of us got into the habit of buying more substantial food, bottled water and snacks for breakfast and lunch at the grocery market.

As evening fell, a few of us were ravenous (the walk back from downtown effectively burnt off the happy hour eats), so we opted for the wine bar/bistro/brasserie on the corner across from the hotel. It was a great steak dinner (I didn’t know this until then, but Bordeaux is also in France’s “beef country”), though probably more than we should’ve spent, but it was our first night in Bordeaux, so why not (I’m also not sure if the dinner tasted that good just because we were that hungry)? My only regret is not remembering what wine we drank with dinner, because it was really good.

Finally, with jetlag catching up with us after being awake for over a day and half, we dragged ourselves back to our rooms and I collapsed on a bed mattress that was as soft as a rock. As I drifted away, my last passing thought was that I didn’t recall seeing a single cat or squirrel in town.

That struck me as kind of odd.