Having done a bit of traveling these past few years, something I’ve come to expect, but still can’t quite get used to, is leaving a place. It’s a strange feeling, developing a connection with a locale that you’re only at for a short time, and then leaving it for home. I’m amazed at how I can, in a brief amount of time somewhere, pick up new habits and routines, and become familiar with new customs and faces. Like many people, I’m a creature of habit and find my “comfort zones” when traveling and use them as the foundation for jumping off into and returning from new experiences and adventures. Reykjavik’s small town vibe, its friendly and helpful people, and environment far removed from my own had an instant appeal that was proving tough to shake off, and I could appreciate the number of Americans we encountered this past week who picked up everything and permanently relocated here. Throughout the week, I met several fellow Americans working in stores or restaurants. When asked why they lived here, one said they came here as a student and simply didn’t want to leave, and others wanted to get away from whatever was back home and try something different. More power to them because I’m not sure I could live that far away from my friends and family (though it may be because of those factors that these expats came here in the first place).

Needless to say, while I looked forward to sleeping in my own bed and seeing friends and family again (and a new girlfriend this time), another part of me was sighing “Fuck it, just sell everything and stay here.” Sadly, when you have roots as deeply planted back home as I do, that little voice is just not loud enough to overcome the reality of its suggestion. And if I’m honest, the girlfriend wasn’t keen on living in the cold either, so staying here wasn’t such an all-consuming temptation after all.

Where The Lifeguards Wear Parkas 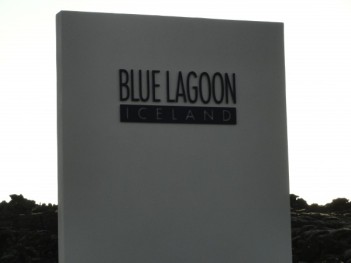 Our flights weren’t until later in the afternoon, and after breakfast we checked out and hopped on our bus, stopping at the famous Blue Lagoon spa. Just 20 minutes from the airport (40 minutes from Reykjavik), many visitors and tourists see the spa en route to the airport before leaving Iceland, and we were following true with the tradition. Like the previous two days, it was cold and slightly windy, making the idea of hopping into a warm manmade hot spring even more inviting.

If the Blue Lagoon had any downside, it was the cattle car process they had in place for checking in guests and moving them along to the locker rooms. Given our tour group’s size of 18 people, we held up the line a bit as Paul patiently negotiated with the baggage desk and ensured our bags were squared away while we went into the spa.(1) Then there was getting through check in, which is a bit like trying to fight your way into a New York City subway station at rush hour, complete with irate guests amongst the crowd. Finally inside the locker rooms, Iceland’s strict rules of hygiene were guardedly followed as all of us changed into swimwear and showering before heading out.(2)

The spa offers a small lobby area leading to the pool, with a meager and overpriced snack counter and a true shortage of chairs if you want to hang around inside for a bit. The place had a bit of a claustrophobic feel to it with so many people coming in and out, and I can only assume that the lobby was purposefully designed small for coercing guests into going outside. We were anxious to hop into the water and marched through the heavy doors…and into brutally cold, sulfurous air. Quickly reminded that we had just doused ourselves in showers, the frigid air turned lukewarm water into steam immediately rising off bare skin and gave we men what we thought was the most instant and alarming case of shrinkage imaginable (keep reading…). Wasting no time, we pounced into the hot, milky white/blue water.

If you’ve even sat in a hot tub at a ski resort, then you have a small idea of what the Blue Lagoon is like – bubbling hot water meeting freezing air, sending clouds of steam everywhere, with people milling about in the wonderfully warm and relaxing water. The best facet of amusement was everyone applying the silica-based facial mud masks, leaving everyone looking like they had been given the mother of all facials, and all while splashing at each other and imbibing drinks from the waterside bar. As you swam or wandered around, you found pockets of comfortably warm or unbearably hot depending on your tolerance, and one of the popular spots was a waterfall that beat down on you like a masseuse in a Turkish prison. Above all, the surreal part was seeing all of these guests enjoying themselves, dressed as if they were on a tropical beach, with lifeguards patrolling around in arctic parkas and ski pants.

We had several hours to kill at the spa, and a few brave souls brought their cameras along, though Paul had a waterproof one to ensure he had incriminating pictures of us in our facial masks. Soon enough, my time management-sensitive side, hunger and wrinkled fingers like I’ve never seen before convinced me that it was time to get out and get cleaned up. If walking out of the locker rooms en route to the hot spring water was a new experience in cold, getting out was far worse since the spa’s water was much warmer in contrast to the air. Nevertheless, I ran inside, took a full shower (nice that they provide shampoo and body wash) and got dressed. I was a little ahead of myself, so I bundled up and went outside to get some pictures of my own, then wandered back to the main area. 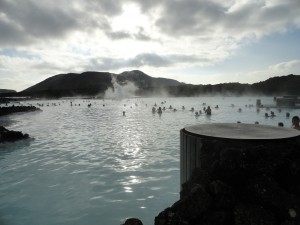 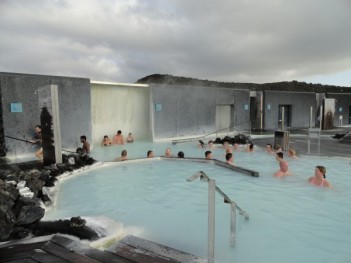 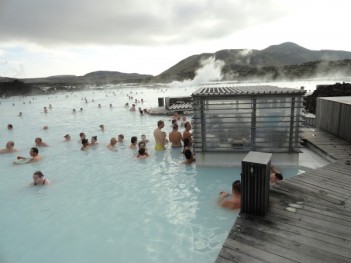 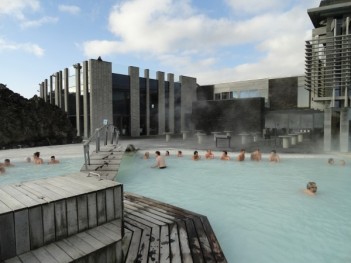 By happy coincidence, I ran into a few of my group who had also cleaned up and were hungry, and we grabbed a table the spa’s Lava Restaurant. Our timing was perfect because within a few minutes of sitting down, the lunchtime rush started lining up behind us – a small but growing crowd of people back in their street clothes like us, in terry cloth robes, or still bravely marching around in swimsuits of all shapes and sizes.(3) All of us ate a lunch of grilled blue ling with langoustine that left you wanting to lick the plate. By the time we finished, it was closing in on our time to hop on the buses, so we made it out to the parking lot and mounted up for the short ride to the airport.

Scenes from an Icelandic restaurant…(4)

(1) I’m not sure if Paul noticed or heard them, but some of the visitors behind us were grumbling a bit because of the delay thanks to our group. I can’t blame them since I’ve had my moments of frustration waiting for others ahead of me to get on their merry way, and seeing a small army of us with our luggage in tow would’ve made me just as impatient and grumpy. Regardless, it’s another example of Paul’s dedication to customer service and marvel at watching him keep a cool head while working through complicated arrangements or negotiations while people are getting irritable about the resulting inconvenience.
(2) I mean this literally. The spa has attendants patrolling the showers, ensuring that everyone rinse off before getting in the spa water. Fortunately, they provide semi-private stalls, but there isn’t much hiding from the patrols as they walk by.
(3) Thank God I was spared fighting my lunch coming back up in view of someone in his Speedo swim briefs.
(4) My apologies to Billy Joel.

Putting U.S. airports to shame, Keflavik International Airport (KEF) has an automated check in so with just a quick scan of your passport or credit card, you have your boarding pass and luggage tags within minutes. Unfortunately, security is just as strictly routine, so our collectively being impressed by the check in was immediately daunted by the long lines waiting to go through the security checks. Oddly enough, I recalled the airport seeming much smaller when we first arrived, but walking through it this afternoon, it seemed much more enormous, and a never ending shopping mall of a duty free paradise. Check in and security had broken us up a bit, so I spotted some of group all over the place as we found our way down to the gates. Unlike other airports, this one only had so many gates, and instead of each gate having its own lobby/waiting area, they all shared the same large one, where a bunch of us eventually settled at. Finally, it was time for boarding, so we said our goodbyes to those on different flights (most of us were on the same flight back to Dulles), and as we walked outside, we were amused by the plane. Icelandair names its planes after the island’s natural features and sites, and our plane’s moniker was for the same glacier we hiked on just days earlier – Eyjafjallajökull.

Blissfully, the flight home was peaceful with the exception of one of my group next to me who was suffering from a mildly irritating combination of ADD and hyperactivity, so she changed positions and whatever she was doing every five minutes (including her watching my riveting play-by-play completion of several crossword puzzles). However, the news over the past week was heavily focused on the Ebola outbreaks happening in Africa and cases turning up in the U.S., and not to make light of the tragedy, but it did offer one bit of humor for me at customs. News coverage was being very clear about the alarm from politicians and populace alike for quarantining anyone from countries dealing with Ebola, paying special attention to anyone who had been in more rural or farming areas. On the flight back, I checked off that I had in fact been to a farm while overseas (technically two of them), and as the customs agent saw this, she exclaimed “YOU WERE ON A FARM?!” looking particularly alarmed until she flipped the form over and sighed “Oh, it was in Iceland…”

Nevertheless, it was good to be home.