Somewhat refreshed from the respite in Strasbourg (mostly physically, but not as much spiritually for me), we crossed the Rhine River. Germany held personal interest for me since my Dad’s side of the family has German/East European origins.(1) The ride to Munich was the better part of the morning, arriving at the city’s outskirts by lunchtime, where we stopped and gorged on generous helpings of roast beef, potatoes and veggies. After a steady diet of mostly chicken and fish, the smell and taste of beef was a welcomed change. The hearty lunch was also timely for boosting our strength on the cusp of another homestay, with the rise of familiar but muted anxieties and tempered expectations.

Like Dublin, we disembarked from the bus for matching up with our respective homestay families. This time, the locals seemed much more relaxed compared to their Irish counterparts, and I met a middle-aged couple who greeted me with smiles and warm hugs. The wife was an administrative assistant and the husband a vice principal at a local high school. Their children were already grown and they were enjoying the idea of a kid back in the house again (even a snot-nosed American). They were very talkative and good-naturedly barraged me with questions about the trip, my background and what I thought of Europe. Theirs was a suburban home not unlike mine and I spent the afternoon settling in the attic/loft that was my bedroom, talking with them over a pot of tea, and briefing me on their neighborhood. The wife, whose disarming sense of humor included pinching her nose as I unpacked and said something in a mix of English and German regarding me being a typical teenage male, then grabbed all of my clothes and threw them in the wash (leaving me with little else to wear).

Both the wife and husband had work commitments the next day, so after a quick breakfast they ran off and I folded the small mountain of my clothes sitting on the dryer. It was a relief and lift in spirits to enjoy a taste of home again and clothes that didn’t suffer from “traveling a bit too much” (up until now, I was employing copious amounts of deodorant for masking any particularly body-odor-saturated clothes…I know you needed to know that).

Like a mother bird pushing its baby out of the nest, the couple gave me a spare key for the house and left me on my own. I explored the area, finding their local town square, a church on every corner, and friendly nods and advice when I needed help or directions. I was back by mid-afternoon and found the couple sitting around the table with friends drinking wine, cooking something that smelled amazingly good and asked me more questions. As night fell, everyone went home and the husband chatted with me over more tea. He was a huge movie fan, showing off his collection of videotapes (damn it, do you not know what those are?!) and telling me how their typical date night involved going out to the movies. He especially enjoyed World War II films (cheering for the Allies, of course…no doubt his father fought on the Russian front), and we watched Where Eagles Dare dubbed in German with English subtitles. For the record, Clint Eastwood “speaking” German still feels incredibly wrong. 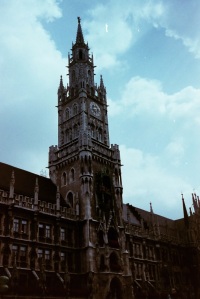 My host was off of work for the next few days, and planned a busy schedule of events for my visit. We began with a whirlwind tour of Munich, starting with a quick jaunt on the Autobahn, where he gave me a thorough history lesson on it at very high speed and the hard work for obtaining a drivers license in Germany. He drove us south of the city and along the foothills of the Alps (my only time seeing them in real life). We circled back into downtown for a tour of the greater landmarks (i.e., Siegestor, Odeonsplatz, City Hall), stopping for sightseeing at St. Michael’s Church and Munich Cathedral. 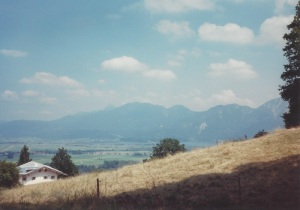 We ended the day with what my host said is an absolute requirement – visiting the Hofbräuhaus am Platzl (in his own words, “One simply has not visited Munich without going there…”). Inside, the beer hall was full of patrons – most of whom he seemed to know or Munich is that friendly a place. We no sooner sat down when my host gestured at a passing waitress and two giant glass steins of cold beer were sitting in front of us, followed by baskets and bowls full of bread, pretzels, cheese, mustards and sausages. My host was a thin, fit man for his age, and though I was slowly working through my own, he downed two steins without feeling them. He also demonstrated no problem with eating as much as I was shoveling in, and we nearly rolled out of the hall stuffed silly with food. 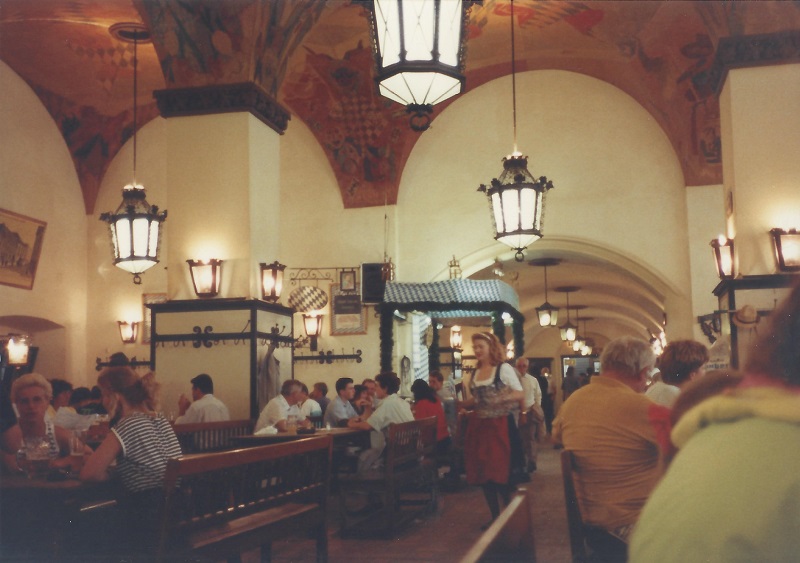 A Palace, A Museum…and Jousting

The following day began with a quick run by my host’s school. It was dark and empty, and passing by classrooms hit a bit of soft spot for me. It could’ve been my high school – bulletin boards were covered in announcements and artwork; empty desks sat patiently in neat rows; dented, scratched and stained from who-knows-what lockers held silent vigil; and tidy columns of textbooks and papers filled bookshelves. Apparently, some of my group were staying with one of my homestay host’s coworkers, who was there with his kids and my fellow travel companions. We walked in on them during some kind of wrestling match (the kids, not their father…who wasn’t around), and my host

immediately ran over and scolded the Hell out of them – German and American alike. Until now, this was the first time I witnessed that level of emotion from him, and judging by how fast the other kids snapped back, he knew how to discipline teenagers.

Our next stop was Nymphenburg Palace, sort of Bavaria’s answer to Versailles. Like its French counterpart, we toured all around the garden grounds and a good stretch inside the Baroque palace, topping it all off with the accompanying Marstallmuseum and its collection of royal carriages (pictured on the right is King Ludwig II’s dress coach). 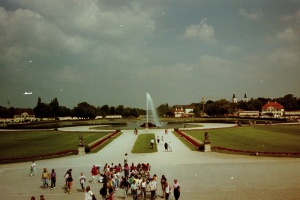 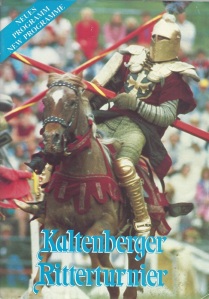 And now, time for another confession. In addition to multiple geeky hobbies as seen on The Big Bang Theory, I’ve also attended multiple Renaissance fairs, including the renown Maryland Ren Fest. I admit it – I’m guilty of “going medieval” – checking out enthusiastic patrons and festival staff in their costumes, competing in axe throwing competitions and participating in archery contests (see below on the right), and watching the variety shows. Today, several of my childhood and more contemporary friends live for these

festivals (in and out of costume), but I typically attend them maybe once every five years or so.(2) My host introduced me to the Ren fest experience, where we spent that afternoon at the Kaltenberger Ritterturnier (i.e., Kaltenberg Knights Tournament) medieval festival. In fact, this was my first time at this kind of event, and we spent the afternoon checking out artists and artisans, watching medieval dancing, drinking mead, dodging faux lepers, and the big event – a jousting tournament.

After a full afternoon complete with horses riding through fire and armored men ramming into each other with balsa wood lances, we returned to modern times. It was evening by the time we arrived at his house, where I packed up my things for rejoining my travel group on the final leg of the trip. 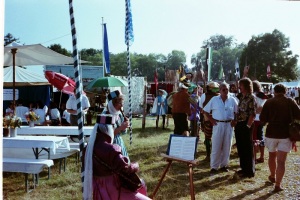 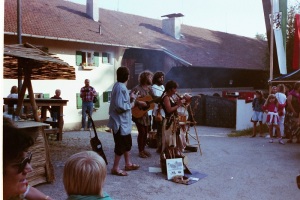 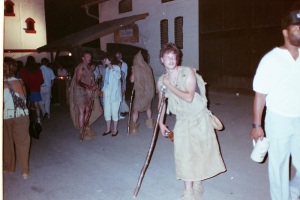 (1) At roughly 120 miles away, I didn’t realize then how close I was to my birth place (Bad Kreuznach – near Frankfurt). It’s the only time I’ve been that close to there since…well…my birth.

(2) Believe it or not, I’ve never attended a major sci fi convention (e.g., Comic-Con), though I have attended much more…modest ones hosted by the Virginia Tech Science Fiction and Fantasy Club back in my college days and the Fairfax Comic Con in August 2018. My favorite Maryland Ren Fest shows are Shakespeare’s Skum (who perform/improv plays in 20 minutes or less – I highly recommend their performances of Julius Caesar and Macbeth), and sword swallower Johnny Fox (who sadly died in December 2017). Also, you’d think that given my geekiness, I’d be dressed up in medieval clothes for these festivals, but you’d be wrong (the picture on the right best represents my general appearance anywhere cosplay is even a remote possibility). I greatly respect and admire the cosplay community for its genuine enthusiasm and artistry, but I’m not one for diving into the deep end of that particular pool.