Claustrophobia on the High Seas

The ferry sailed north up the English Channel and around the peninsula of North Holland. My time on boats and ships was very limited, so I never lived in tight quarters before, and this seemed a little apropos while heading for a small country. We were split up and stowed in what would normally be called “closets with bunks” and shower stalls that made phonebooths seem roomy by comparison.(1) Since I’m not the tallest or bulkiest man by any stretch of the imagination, I’m torn about whether these shower stalls or the one in my Bordeaux hotel room ranks as the smallest space I ever occupied (that hotel didn’t provide accommodations with distinct “bathrooms” so much as “bath areas” in a corner, including a shower stall that I literally squeezed myself into).

Settled in for the overnight cruise, the rocking of the boat quickly lulled us to sleep (and I rarely sleep well on anything in motion). In the morning, we disembarked and checked into a hotel that was on the edge of an “red light district,” resulting in a well-meaning-but-fell-on-deaf-teenage-ears warning. Truth be told, I didn’t see a single sanguine-colored or otherwise suggestively-lit window the entire time we were there, so I wonder if I took the term “red light” too literally and/or our chaperones were needlessly (but understandably) cautious.

We spent the better part of the next few days touring downtown Amsterdam, catching the sights (e.g., Royal Palace) on what were ultimately grey days. We also stepped into history and visited the Anne Frank House, beginning with a long waiting line. One of our orientation sessions focused on the potential hazards of traveling abroad, including pick pockets. That warning stuck in my head, and I obsessively checked and rechecked my body belt (with spare cash and passport) throughout the trip. As we not-so-patiently waited in line, one of the girls in my group gasped as a small group of guys bolted off. Several of the boys from my group pursued them but returned empty handed. Afterwards, the girl described her charming conversation with one of the cute locals and felt something move by her waist, catching another guy slipping his hand into her purse. The post-game analysis determined that they were a team, one for distracting the mark and the other for making the pull. Fortunately, they didn’t snag any of her valuables or IDs, but it resulted in a bit of an adrenalin-laced tour through the house.

We wrapped up our stay in Amsterdam with an early dinner at a medieval-looking restaurant near the Amsterdam Museum with its 17th century wooden David and Goliath statues. The restaurant included a huge buffet that we pretty much cleaned out, and served ice cold milk in chilled pottery cups that was the best I ever tasted in my life (the milk, not the cups). Afterwards, we all had a little too much fun with some of my group showing off their “adult oriented” tchotchkes and souvenirs.

Tilting at Windmills and a Very Mini Tour 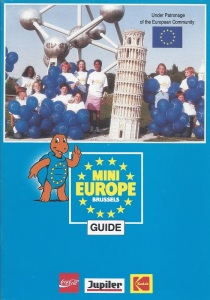 Next, we saddled up for the road trip headed for Brussels. The morning was sunny and windy, ideal conditions for the traditional Dutch tourist experience – WINDMILLS! We stretched our legs touring gristmills and sabot workshops, and eventually made a stopover at Mini-Europe. This amusement park, in the northern end of the city, is a sprawling-esque tour of Europe for those who don’t fancy traveling all over the continent (i.e., a real time saver and easier on the wallet, but a letdown if you hanker for the real thing). The park boasts hundreds of miniatures, including smaller versions of landmarks we previously visited and others still awaiting us. 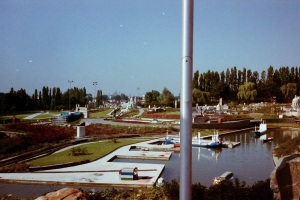 TOP ROW: A brief stop for windmills and a sabot maker.
BOTTOM ROWS: Mini-Europe in all of its tiny glory. 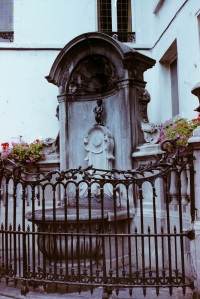 Making the most of our stay, we toured the city (notable sites were the Town Hall and Manneken Pis) and visited the Stella Artois brewery. Up until now, the most amusing thing during this leg of our journey was our teacher leaders’ warnings about exploring the red light districts. That quickly changed as they turned increasingly more nervous while watching us (of age) exploit Europe’s lower legal drinking age and our host’s well-meaning invitation for imbibing free samples of beer. After a conspicuously happy and boisterous ride back and another good night’s rest, we prepared for one of our more highly anticipated destinations.

(1) In case you’re not old enough to remember, phonebooths were small, street-side structures with easily accessible yet immobile phone services. When not used by st

randed drivers seeking aid or spies and mobsters for untraceable phone conversations, they were frequently abused by college students in stuffing contests. They were also utilized by superheroes for changing into costume, but this literary practice fell out of favor with modern booth designs (i.e., not as encapsulating) and the invent of mobile phones.
(2) Ahem…yes…I am wearing a fanny pack AND a Members Only jacket. In my defense – I was a teenager, it was the end of the 1980s, and some very famous and much more admirable gentlemen are as guilty of my tout ensemble faux pas (see below). FYI and in case you’re wondering – this last example is Jack “Star Hustler” Horkheimer. He is best known for his beloved and cheaply-produced “Star Gazers” show, which my local PBS station (WETA) aired late on Saturday nights after Doctor Who reruns. Episodes of his show are available on YouTube (you’re welcome).