You Don’t Walk These Streets, You Climb Them

Wednesday morning’s fog was short-lived and we enjoyed a slightly cooler, but still summer-like day. Today was a full day on the road, starting off with a tour of the very old village of Saint-Émilion (almost due East of Bordeaux and across the Dordogne River). The town was the Bordeaux of its age (dating back to Roman times – second century – when vines were first planted in the area). The commune is full of ancient architecture (some of which is still in use), the original church, and cobblestone streets that are more like paved hills to climb up and down. I can only imagine what it must’ve been like trying to get heavily-laden ox carts up some of those streets. Also, it was a little humbling to see one senior citizen-aged tour group slowly work its way down one of these streets after a few of us young ones nearly slipped and fell on it (This didn’t stop me from thinking about “Help! I’ve fallen and I can’t get up!” jokes in a mock French accent).

We took a tour of the church and town square, led by a lovely woman named Camille (more than a few of us took a liking to her).* Sadly, we weren’t allowed to take pictures inside the church or Saint-Émilion’s cave/home. It turns out he was a monk who endeavored to help the poor, and his first miracle was when he tried sneaking bread out of the church. The priest stopped him, asking what was under his robe, to which he lied and said it was wood. When forced to open his robe, the bread turned into wood and then back into bread once he left with it. Another miracle was his meditation chair (in his cave/home) that was known for granting women fertility after sitting on it. We couldn’t help doing to the math about this phenomenon, especially when you consider how local women would go into a lonely, monastic hermit’s cave and then became pregnant shortly afterward. Even our guide Camille mused that there may be more to the story than merely genuflecting on a stone stool. 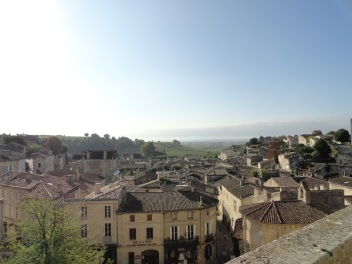 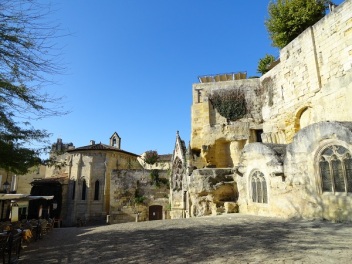 * Her only flaw is that she smokes.

Given some time to explore the town on our own, we sat down for lunch at a café in the town square. The square is at a 20 degree angle, so I was constantly scooting my chair back up to the table. We also spotted what I’m pretty sure was the first cat we encountered (possibly the only one) while in France. Again, I don’t know why this was so odd to me.

On the bus heading to the first winery of the day, one person taught a few of us how to play Spades (I don’t think I’ve played it since college), which lasted all of 10 minutes when we arrived at the first winery.

A Great Place for a Nap and Match.com Profile Pictures

Chateau Fonroque, with its red barn doors and shutters and tree-lined road, (the branches forming a tunnel), was peaceful, relaxing and welcoming to us. As we explored the grounds and took pictures, one woman in our group found a set of stairs that everyone also wanted to get their picture at. Another woman started joking about how that was the “Match.com, eHarmony” picture for everyone.* What really charmed me about the winery is the antique equipment they have around for decoration, including an old bottle corker,** and a 90 year old wine press that’s still in use. This also was where we learned about the tradition some wineries have of planting roses at the ends of the vine rows (no real explanation was given for these, just for aesthetics). 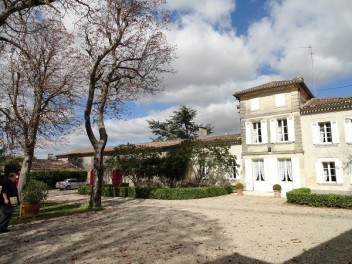 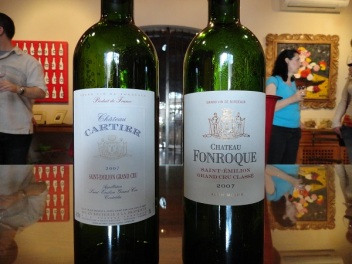 * Yes, I did get a picture of myself here, and no, I won’t post it because it came out terrible.
** It reminded me of the modern version of it that I used at Zephaniah Wine Farm when I helped bottle wine.

We were invited to taste their 2007 and 2008 vintages (70% Merlot and 30% Cabernet Franc), which are amazing to say the least – rich, deep Bordeaux wines. We were running ahead of schedule, so a few of us sat outside to enjoy the cool, sunny day. It was one of those spots where a nap was almost too tempting.

Moving on, we took advantage of our extra time for another quick follow-up visit at Saint-Émilion, and then our final stop of the day at Chateau Figeac, with a large estate house still in use by the family/owners. While there, we tried their 2006 (35% Cabernet Sauvignon, 35% Cabernet Franc, and 30% Merlot), which I’m still pretty sure is my favorite of all the wines we tasted on the trip. 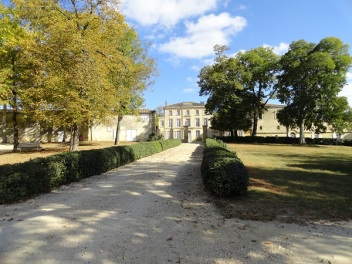 En route back to Bordeaux, Allen and Paul suggested stopping at Planet Bordeaux, a conglomerate of several smaller wineries that produce good, but more affordable/“everyday drinking” wines. Planet Bordeaux is part museum, part tasting room, and unfortunately, we were running late on time, so we breezed through the tour (a multimedia history and agriculture lesson) and straight to a wine tasting. What amused some of us was seeing wines that ranged in price from 15€ to 20€, to 0.50€ per bottle.

That is a Tasty Burger

Once back in town, we ate dinner at a pub just a few blocks from the hotel called The Central Pub. Unfortunately Creepy Guy eventually walked by and decided to join us (we were sitting outside), and I ended up stuck in the middle of a political debate he had with another tour group member.* On happier note, The Central Pub serves a burger with tater tot-like potato patty in it. While this sounds silly, it was as amazingly elegant as it was incredibly delicious, though I have no idea why it comes with fries given the potato patty inside of it.

* This was a rare moment of me keeping my mouth shut, and those who know me will tell you that this was a major feat of self-control on my part.