The cold front that accosted the East Coast when we left the U.S. had finally arrived in Europe, and today was somewhat cooler than we were used to so far on the trip. Shorts and t-shirts were abandoned for jeans, jackets and long-sleeve shirts and sweaters. One or two of our group wanted to see some of the sites Paul and I checked out previously, as well as get some shopping in, so we explored downtown again this morning. Paul and I were trying to retrace our steps but still got off the beaten track we took on Tuesday, leading us to Bordeaux’s Victory Square, a large square in the middle of the city. Despite hunting around, we never did figure out why there’s a large, bronze turtle in the middle of it (we attempted to get Paul to get on top of the turtle for a picture, but he wouldn’t do it).

Walking over to the closest tram station, I stopped to get gum out of my bag and offered some to Paul. Out of the corner of my eye, I saw an outstretched hand and thought it was one of the women from our group asking for a piece. Instead, I turned to a young French woman (probably college age) holding her hand out in a “Well, since you’re handing out gum, where’s mine, biatch?” manner (one of the few times I find pretentious/rude behavior amusing). She said something to me that I guess/hope was the equivalent of “May I bum a piece?” and gave her one. Just as well, I checked all my pockets and satchel afterward to make sure the woman wasn’t a decoy for a pickpocket.

Despite the cloudy weather, our tour of the Margaux region (north of Bordeaux) took us to what I consider to be the three most beautiful wineries on our tour. Chateau Kirwan is a magnificent estate with a picture-perfect garden, as well as matching male host, Francois.* While touring the grounds, Francois discussed their planting new vines next to old ones, and showed us a one year old vine sapling (a first for me). We tasted their 2005 and 2008 vintages which are probably my second favorite wines of the whole trip. 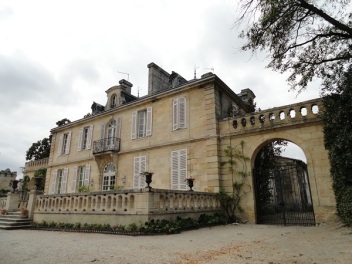 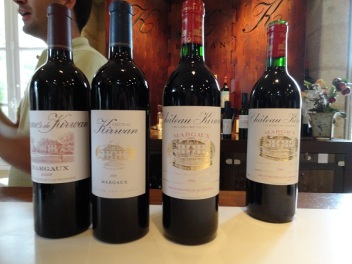 * And I say this as a secure, heterosexual man. Now, I don’t mean to imply anything here, but I couldn’t help noticing that a significant number of our female tour group members spent a bit of extra time in the tasting room/gift shop while at this winery.

Our Most Gracious Host by Far

Chateau Brane-Cantenac is an impressive, large-scale winery and our host (if I remember correctly) is the wife of the owner – a wonderful woman who instantly made you feel welcome, just like a mom (and she is originally from Colorado, too). She took us on a wonderful tour of the grounds, including the optical scanner they use for analyzing the fruit. She was almost embarrassed while counting gift bags because she thought she miscounted and admitted to one of the group that she was pretty sure she had the number right “Unless I fucked up.” Her charm was definitely infectious, but hit one bump in the road when Creepy Guy may have mildly irritated or insulted her by comparing one of their wines to a Virginia Cabernet Franc.* Incidentally, the 2005 vintage we tried was also absolutely amazing (62.5% Cabernet Sauvignon, 33% Merlot, 4% Cabernet Franc and 0.5 Carmenère).

* This is by no means a slight to my beloved Virginia wines, but comparing them to this class of wine is just wrong. They’re not even in the same ball park.

Went to a Winery, but Ended Up at a Disco

Admittedly, I’m partial to Chateau Lascombes because of our host, who is originally from Brazil. Between her and the winery itself, I wanted to move there and marry her. The ivy-covered mansion was beautiful by itself (little bit of trivia, it was used as an Allied Forces headquarters back in World War II), but the real surprise was their cellar/aging room. The enormous room is much like many of the others we already saw, but this one was decked out in stark blue lighting, that made the room feel like a disco without the music or gyrating dancers. We tasted their 2005 and 2008 (55% Cabernet Sauvignon, 40% Merlot and 5% Petit Verdot) vintages, which weren’t my favorite, but still incredible to taste. 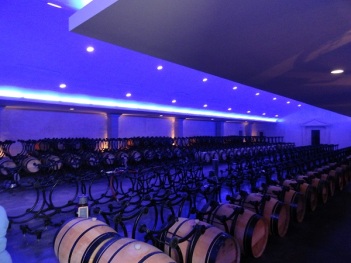 That’s “Shots” as in “Pictures”

We returned to Bordeaux hungry and in the rain. Creepy Guy managed to tag along with us…again,* and we settled at a restaurant that offered three course meals at 13.50€, 15€ and 18€ options. Our waitress put on a bit of an attitude, and insisted on us ordering from the 18€ option. Admittedly, the food was very good, and when it came time for dessert, I was going to have crepes,** but the table of women sitting next to me cheered for another dessert as the waitress listed off the choices, so I went with that one instead. It was a flourless chocolate cake with a cream sauce that left me wanting to lick the plate clean. Creepy Guy managed to sit next to me (to be fair, he was well behaved and we had a brief conversation about movies – he has terrible taste in movies), and I discovered a new level of annoyance for people who can’t chew with their mouths closed.

* He seems incredibly talented or gifted at either tailing people (a good skill for stalkers…or so I’m told) or lurking in the hotel lobby, waiting to “ambush” a group by tagging along – without asking or even saying a word to them. There were more than a few times when heading off to dinner and turned to see him standing behind us.

** We all had a running list of traditional dishes to have while in France. Sadly, escargot was the only one I didn’t get to while there.

After dinner, we opted to walk back across the Pont de Pierre and I took advantage of the opportunity to take some night shots of the city, to which everyone thought I meant shots of alcohol until I pulled out my camera. The rest of the crowd went on ahead as I was taking pictures, and soon enough I realized that I was alone, at night, in a foreign city. Not that Bordeaux is a heavy crime area, but I suddenly got paranoid about potentially being the only idiot in my tour group to get mugged, and high-tailed it back to the hotel.

Taken from the East (or “Right”) Bank of the river, looking West.