I was woken up around 2:00 AM because the guests next door were REALLY enjoying each other’s company and wanted everyone to know it. I’m not sure what language they were yelling in, but it sounded like they were having a pretty good time. Regardless, we needed to be up early this morning so we could head over to Pearl Harbor. Thanks to the amorous wakeup call provided by my fellow hotel patrons, I was up early enough to grab some coffee and a scone from the coffee place next door. Heading back to my room, an Australian carrying a cup of something from Starbucks stepped into the elevator with me. He noticed my coffee wasn’t from Starbucks, so the conversation went something like:

Australian: Eh mate, you’re a yank, right?
Me: Yeah, why do you ask?
Australian: I just had my doubts because I have Starbucks and you don’t!
Me: That’s okay, I had my doubts about you being Australian.
Australian: Because of my accent?
Me: Nah, because you aren’t holding a Fosters.

Thanks to the sequester passed by Congress, one of the cut backs it requires is reducing operating fees for some of the national parks and monuments, and Pearl Harbor now ends tour services at 1:00 PM. As a result, we arrived at the monument and museum entrance, which was already mobbed by tour groups and other tourists waiting to buy tickets for ferry rides to the USS Arizona Memorial and the USS Missouri. Despite the fierce competition from other tour guides, Paul was the last one to grab available tickets for the day, but they were the last 8 tickets, which was a problem for our dirty dozen. As it happens, most tour guides know the deal and try to snatch up as many of the tickets as possible, so Paul bartered with a few of them to trade for tickets we could all use. The down side was we had to go to the Arizona Memorial in separate groups, but at least we were all able to go. Unfortunately, we had the predicted on and off rain coming through, but our tickets weren’t until noon, so we hoped that the rain would be gone by then. We killed time by touring the museums, which were pretty impressive in their own right, including unguided tours inside the USS Bowfin, a World War II-era submarine (Where I appreciated the conditions those sailors worked and fought in, and was glad that I wasn’t the tallest man in the world while walking through there). 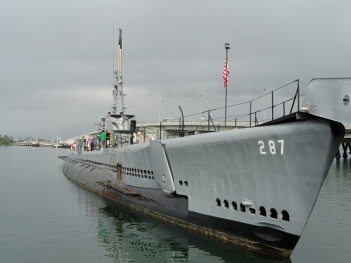 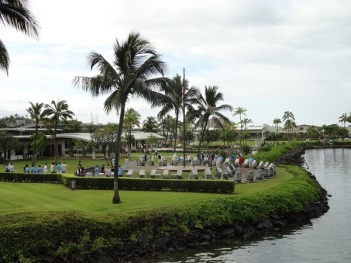 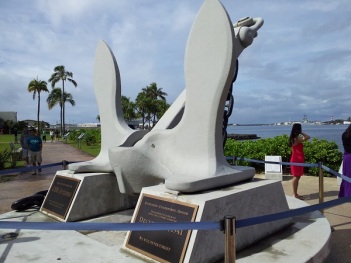 The sub is the USS Bowfin, the memorial is for everyone who died during the attack, and the USS Arizona’s anchor.

Before you go out to the USS Arizona Memorial,* the park requires you to watch a short movie that offers some perspective about the history of what happened at Pearl Harbor. The fact is, when you visit the memorial, there are men entombed below you, so there’s an understandably intense need to make sure visitors show respect there. Being a bit of a history buff and a former military brat, I already value what Pearl Harbor represents today, but the reminder and message passed on by the movie really puts you in the right mind set before getting on the ferry. Fortunately, the rainy weather held off just long enough for my group’s ferry ride out to the memorial, but not for long, and on top of that, my digital camera’s battery died, so I had to rely on my not-as-nice camera phone the rest of the day.

Between the movie and the memorial, it’s a somber, moving experience. Seeing parts of the battleship beneath you or sticking up out of the water gives that sinking (no pun intended) feeling about the reality of being where one of the most notorious moments in history happened. The crowd was quiet, and even kids were shushed quickly. The one thing that threw me off about it was strong smell of petroleum in the air. The Arizona’s wreckage is famous for its remaining oil slowly leaking and floating up to the surface, creating what’s known as the “tears of the Arizona.” It augments the somber feel of the place, as well as the Missouri watching over the sunken battleship just down the shoreline. The gesture of having the remains of the Arizona and her crew (Representing the beginning of our involvement in the war) symbolically watched over by the Missouri (Representing our ending the war in the Pacific) wasn’t lost on me. 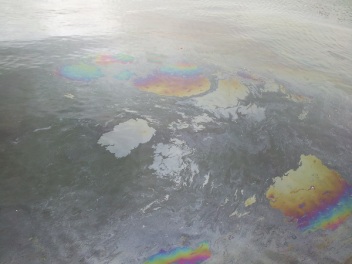 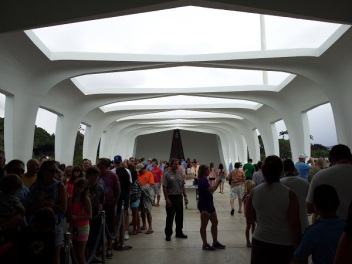 On top: The USS Missouri keeping watch over the USS Arizona, and the “tears of the Arizona.”
On the bottom: Arriving at and inside the memorial.

* On a more humorous note, the older gent I mention in the previous day’s outings caused a bit of a panic for us at Pearl Harbor. While he painfully and slowly climbed up Diamond Head, he was buzzing around like a kid on a sugar high all over the museums today and disappeared on us shortly thereafter. Paul corralled as many of us as possible to look for him, but the man was gone. We found out later that he somehow managed to hop on an earlier ferry to the memorial without telling anyone. As the week went by, we all noticed that despite his health issues, this man REALLY moved pretty fast on his feet.

A Temple and a Cemetery

The rain soon returned once we finished up at Pearl Harbor and headed back around toward Honolulu proper. After a not-so-great lunch at a Thai place we found, we visited the Byudo-In Temple in the Valley of the Temples Memorial Park, and possibly one of the most serene places I’ve ever been. The temple is a is a replica of a 900-year-old Buddhist place of worship at Uji in Kyoto, Japan, complete with koi ponds, meditation niches, a huge Buddha and giant peace bell outside (Sadly, we couldn’t ring it because the giant ringer was chained up). It was an apt follow-up to the somber Pearl Harbor, and is definitely one of the more beautiful places of worship I ever visited. 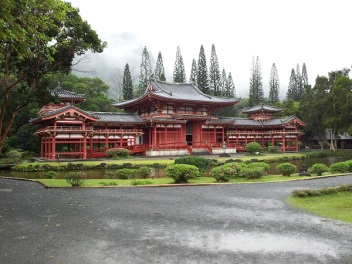 Our last tour stop for the day was the Punchbowl Pacific National Cemetery, basically the Arlington Cemetery of the Pacific. The entire grounds is inside a volcanic crater (Hence the name “Punchbowl”), which gave the place a bit of a surreal feel with terrain curving up all around you. Almost on cue, the rain stopped when we arrived, the clouds parted and the sun came out. Unfortunately, the clouds didn’t part enough to take decent pictures of the overlook down to Honolulu.

The waves of rain kept coming in and out the rest of the day, so the consensus was to head back to hotel for some pool time during a break between rain storms. Coming back from dinner that night, an army of scantily-clad Australian teens poured out of the hotel lobby to go clubbing. I think it was the only time I had the lobby and its wifi all to myself.