Do Working Girls Stay Up Late or Wake Up Early?

As I’ve mentioned previously, I’m not a morning person, so waking up before sunrise is generally a tough, and most times precarious experience for anyone with me or I encounter shortly after waking up in the ungodly wee hours of the morning. However, the big event for today was very early in the morning – a hike to the top of Diamond Head, so we needed to be up early to 1) hike while it was still relatively cool outside, 2) avoid most of the crowds, and 3) see the sunrise from the top of the crater. We were scheduled to meet downstairs at 5:45, so I was up at 5:00 and down and waiting for the for the shuttle bus to the park just as the hazy black of night was melting into twilight’s hues and tints of blue.

The shuttle bus was delayed as it picked up other hikers, so while waiting, a painfully thin but attractive blonde woman in a club outfit (i.e., skin tight, sparkly and a mini skirt resembling a belt so much that she may very well have bought it from the women’s accessories department). I didn’t give her a second thought until I heard the dull clopping of the platform shoes she was either deliberately stomping in or never wore before. She had the slight stagger and stumble of someone who was still buzzed or not down from their high, and all while apparently texting on her phone. She walked by us, turned around, walked by again, and kept making her “orbits” around us until she decided to move on. As she walked away, a big huge mountainous guy in a leather coat* popped out of the woodwork and walked off with her. In short, I think we saw our first prostitute and her pimp. Why she felt a group of mixed company tourists in obvious hiking clothes were good “Johns” to check out is beyond me.**

* Even if it was dark out and just cool enough to justify wearing a long-sleeve t-shirt, but Huggy Bear wearing a leather coat in Hawaii?
** Beyond what I’ve seen on HBO’s “Cathouse” series (Which I don’t assume to be anywhere close to reality), I can’t claim to know that much about the business practices of the world’s oldest profession.

To the Top of Diamond Head

The shuttle bus arrived and we were dropped off at the park entrance while the sun was still below the horizon. After our share of pictures at the entrance, we started off on our 0.75 mile uphill trek. Even at 6:30 in the morning, there was a steady stream of other hikers and routine joggers/runners heading up hill. In fact, throughout the hike, I couldn’t help noticing how several runners made multiple passes by us. Apparently, it’s pretty common for dedicated runners to make multiple circuits up and down the crater trail.

On our way up, a few of us were keeping an eye on the oldest member of our travel group. He was a 63-year-old retired teacher from New York City who was bent over in a permanent stoop and sounded EXACTLY like Alan Alda – mannerisms and all.* The two things he constantly reminded everyone about on the entire trip was 1) he’s Jewish and from New York, and 2) he’s retired and “didn’t give a fuck” what you thought about him or his social status. Now, it’s not being fair to him when I say that 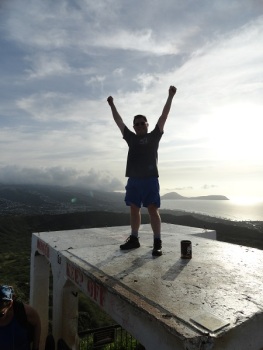 because he was generally a nice enough man, even if he got on our collective nerves a few times because no one’s statement or question EVER went without his unsolicited comment/answer/response (And sometimes at the other person’s expense). He previously told us how he was concerned that the hike would cause him dire back problems, but he was a trooper and made his way up, if trailing the rest of us from time to time.** After the hike, we didn’t see him for the rest of the day because he made a bee-line to the local hospital for an epidermal shot and bed rest to recover.

The hike up to the crater summit isn’t a difficult walk, but there are places of very uneven ground and the infamous “99 steps” near the top, that are disturbingly steep to climb up (Even more intimidating coming back down). Halfway up, the sun was above the crater line and creating long shadows where ever we looked. As we reached the top, the view proved to be worth the effort – 360 degrees overlooking Honolulu and the surrounding area was AMAZING (Admittedly, I was pretty camera happy and took more than my share of pictures at the top). The hike back down was relatively uneventful, but took longer due to the influx of other tour groups who weren’t up as early. 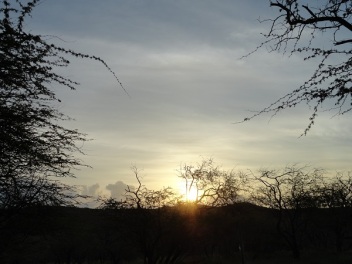 Sunrise and half way up the hike. 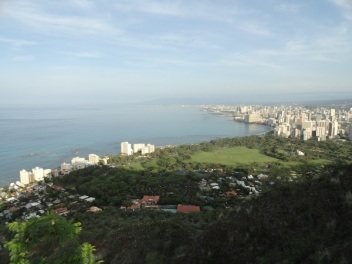 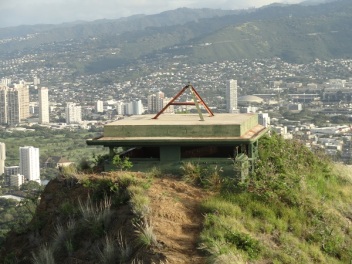 * One striking thing about this man was when he told us he’s 63 years old. My Dad is a few years older than him and he looks at least 15 to 20 years younger by comparison.
** Oddly enough, he became notorious for zipping off and disappearing in the blink of an eye, which he pulled off at Pearl Harbor, but read about that in the next day’s entry.

We arrived back at the hotel by 9:00 AM and everyone split off to do whatever they wanted since the rest of the day was free time. I decided to spend some time in the hotel pool to cool off. My initial plan was some beach time, but the sunburn on the back of my neck from the previous day and the morning’s hike convinced me to stay in the shade.

A few of us spotted a hand-made Raman noodles restaurant called Marukame Udon a block or two from the hotel. What always grabbed our attention about it was the always-present long lines of people waiting to eat there, and most of them were Asian. One of my goals for the trip was to eat only at places that weren’t big chains, and a few of us decided that the travel axiom of “if there’s a line out front, then it must be good” regarding local eateries applied. After waiting in the relatively fast-moving line, we discovered that the other patrons had good reason for waiting – they were some of the best damn noodles I ever ate, and my modestly “small” bowl stuffed me by the time I was done.*

Seriously, the crowd is justified, and the place is worth waiting for.

After lunch, I went exploring down along the main drag of Waikiki Beach, which consists of high-end, big name, uber-expensive stores and boutiques. By late afternoon, lack of sleep and being active the past few days caught up with me and snuck a nap in before the evening. For dinner, a few of us ate at a place cheesily named The Chart House that overlooked one of Honolulu’s many marinas. Walking in, it looked like any beach area seafood joint trying to look better than the others – dark wood and decor, light up fish tanks, nautical-themed knick knacks hanging everywhere, etc. And while it didn’t look that impressive, the food was phenomenal (I had the Chilean Sea Bass and Macadamia Nut Ice Cream – both of which I’m still craving). Afterward, we went back to Waikiki to take some night time photos. 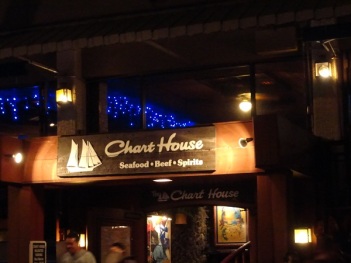 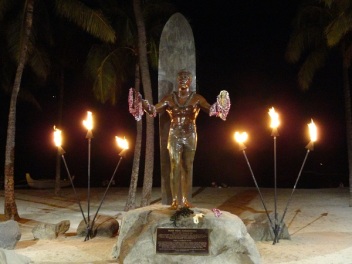 The statue is of Duke Paoa Kahanamoku, the “father of international surfing.”

A little apprehension shared at the table was that tomorrow was our scheduled trip to Pearl Harbor and some touring around the city, but weather predictions were for a bad storm to hit, so we were hopeful that it wouldn’t ruin the day for us.

* By comparison, Paul is a man of “generous” appetites and his “large” bowl of noodles was big enough that even he couldn’t finish it.