Given the “comfort” of my bed, I was surprised to wake up somewhat refreshed and before 8:00 AM. Like the previous morning, people were waking up and wandering around at their own pace. Caroline was up shortly after I was and we spent some time on the front porch chatting it up about life, the universe and everything, while waiting for each of us to have our turn in the shower. As we gathered things up and figured out what to do with trash and recyclables,(1) the cabin steadily returned back to its original, sparse arrangement.

At long last, Caroline gathered everyone together to thank them for coming out for the weekend. To say that she’s missed her active social life while living in exile out in suburban Detroit is putting it mildly. Besides being a lot less cosmopolitan and diverse as Washington, DC, the old friends she has in her hometown are married and/or having kids, so the dull life has been slowly taking its toll on her. That being said, she started to get a little choked up during her speech, and hugs quickly followed.

As well as growling stomachs.

(1) A few of us had a collective “Duh!” moment when we finally realized that the box next to the outdoor trashcan was marked “RECYCLE.” We spent most of the weekend tossing bottles and cans into the regular trash. Nothing like ending a wonderful weekend on an outdoor adventure by feeling the shame of your inner environmentalist. 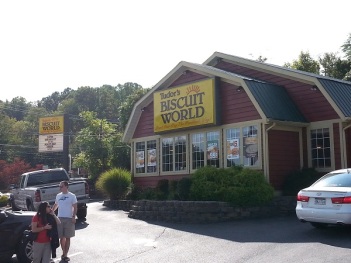 A few were planning to hit the road for their long drive home, but the majority of us decided that we wanted to get breakfast before heading back to reality. En route to the launching point yesterday, our river guide John pointed out several local eateries worth checking out, including the “world famous” Tudor’s Biscuit World.

Oh yes, we had a plan, and it was to see this legendary home of biscuits for ourselves.

We quickly pulled together a couple of caravans to blaze a trail to our destination and promptly hit the road. Now, I’m not 100% sure what exactly Caroline inputted into her GPS or whether her GPS was functioning properly, but it took us on a merry chase, forcing us to backtrack twice before figuring out where exactly we needed to go. And as luck would have it, we finally arrived at our destination in downtown Oak Hill…only to find out that it was the wrong location.(1) Back on the road again, we finally arrived at the correct Biscuit World in Fayetteville, and like a drunk sailor on shore leave who wandered into the wrong Bangkok massage parlor, I was starting to think this may not be the happy ending we hoped for. The place was crazy busy with the sounds and sites of a usual Sunday morning crowd – would be church goers getting a quick bite before or after church and the woeful lament of the hungover who wished a church could cure them. It was clear from the moment we entered that the place was a renovated fast food joint,(2) and choices amounted to about 10 meal options.(3)

Given how busy things were and the size of our group, it took a while for all of us to be served, and the food was about what I expected – quick, hot and no real surprises (which was a welcome and pleasant outcome for this establishment). To be honest, I was so hungry at that point that I would’ve eaten anything they put in front of me, whether or not it was what I ordered and/or marketed as the “road kill du jour.”

On the Road Again

With food, coffee and orange juice eagerly consumed, the time came to hit the road back to the Washington, DC area. We said our good-byes and clambered into our cars. A quick stop at the local gas station to fuel up and get some bottled water, and I was barreling down I-64 East. Given that it was only about 10:30 in the morning and the I-64/I-81 junction was only a 30 minute drive north of Virginia Tech, I spent most of the I-64 drive pondering the logistics of taking a side trip for a brief visit of my alma mater, but I was more eager to get home and collapse. Though it still leaves me with a deep desire to make a road trip down there soon.

Of course, it wasn’t until I returned home that I realized how much I love my own bed and food that takes more than 10 minutes to prepare.

(1) As evidenced by the other caravan not being there and eventually calling us, wondering where the Hell we were.
(2) I’m torn on what the place used to be – possibly a former McDonald’s, but more likely someplace classy like a Hardee’s.
(3) Insert stereotypical joke about the locals not being able to count higher here…and zing.