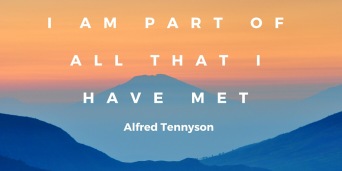 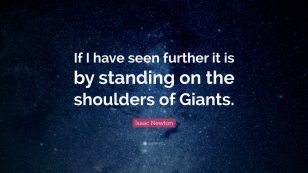 I normally use this blog as a forum for documenting my travel experiences and reflections on them. This is mainly for ensuring I record them somewhat accurately (with a touch of literary flair) because my memory is terrible…bordering on my sometimes wondering if I’m already going senile. And while it’s only a small corner of the Internet, perhaps noticed or enjoyed by an exiguous number of hopefully kindred souls, this site is my selfish and enjoyable expression that may add a few picayune but cogent threads to life’s immense tapestry. So, while I’m currently working on a few writing tasks that are more fitting for this blog, I’m indulging myself here because it metaphorically hits close to home.(1)

Artists of every kind pay homage to the noteworthy and innovative members of their creative macrocosms as influences for their own works or performances. Scientists and explorers frequently cite (and not just because they have to) the great minds of their fields and their discoveries. While someone may have their own unique style, statement to assert, theory to prove, or curiosity of the unknown to sate, inevitably there are forces at play born from their worship of role models and idols. Artists study them to glean greater insight of or decipher how they honed their crafts and created their masterpieces. The logical and scientific pore over their predecessors’ research and achievements, encouraging and illuminating their own drive to expand our knowledge and understanding of the world. From those acumens and intuitions, we develop and nurture our own distinctive “flavor,” which in turn matures into a meaningful expression or provokes new discoveries. Whether an ephemeral glimpse of exquisite beauty or a perpetual and monstrous immorality, and whether based in the artistic and sublime or a result of disciplined reason and research – our work, achievements and discoveries are shaped and colored by the those we covet and revere.

Like many before and surely long after I’ve shuffled off this mortal coil, my own thoughts, perceptions and creative expressions are at least partially to thank from a veritable hodge-podge of far more insightful, talented, interesting, or controversial and notorious minds (some of whom I’ve mentioned in previous entries). Among those inner voices gently nudging at or outright grabbing the steering wheel of my creative ship at sea is Anthony Bourdain. I first discovered him via No Reservations on The Travel Channel, diving into his writings (e.g., Kitchen Confidential and The Nasty Bits), following his current Parts Unknown CNN show (personally, I hold No Reservations as the better of the two), and topped off by his cookbook Appetites. I was lucky enough to see him live on his book tour in October 2016, where he told a number of his more interesting stories and encounters (e.g., his recounting of meeting Ted Nugent, who he declared as the worst person he ever shared a meal with, was pure gold). And it would be a disservice to not at least mention his unapologetic charm and sense of humor, that while sometimes bordered on vulgar, was always well-timed and entertaining.

So why is Anthony Bourdain so prominent and substantive enough to garner my reflecting about his influence on my own writing? While I admit that this blog is a bit of my own wannabe-esque/bromance exercise in emulating him, the fact is he embodies many qualities I hold dear. I’ve been blessed with parents and friends who not only have an appreciation for the wide range of cuisines in the world, but passed it on to me as a child and continued as I became an adult. As well, they encouraged me to experience first before judging – whether that applies to food, people, places or other life experiences.(2)

Bourdain celebrated the power of travel – especially its impact on someone. This theme is repeatedly woven into his narratives and discussions, all while exploring the locale’s people and culture. He demonstrated that diversity and differences, while frequently the sources of rampant friction that can escalate into violence, are worth embracing and exploration. He had no qualms about discussing food, politics, religion or sex with those whom he didn’t see eye-to-eye with, but could still walk away with some measure of insight from the encounter. Better yet, he used his background as a chef to show that food (and drink…often A LOT of drinks) can bring otherwise disparate people together. His episode of Parts Unknown in West Virginia and spending time with Donald Trump supporters stands out as a prime example of his wading into adversarial waters and still maintain a respectful if disagreeing point of view about their political stand or beliefs. His ground-breaking and controversial episode in Iran was eye-opening, showing that the country’s people are…well, people, just like anyone else in any other problematic country. He put a human face on those to whom others might be quick to write off or damn. Sure, someone may still stand for all another despises, but they want love, happiness and safety for their families just as you or I. To be clear, I’m not painting him out as a saint either. He certainly wasn’t above making a few enemies or having an axe to grind (e.g., his feud with Paula Deen and the Food Network is proof enough of this).

He embodied a sense of adventure and moving forward that he used as a cathartic methodology for exploring and framing his ideas, points of view and experiences. He didn’t care what the food was, he ALWAYS tried it – everything from street food to five star meals. He even risked life and limb in his experience (e.g., his habitual drug abuse as a young chef, driving ATVs too fast on a beach, climbing up a cliff to jump into a small pond at the bottom) that he reflected on or shared in his writing about struggles and issues he eventually acquiesced to (as they say – you never get rid of your demons, you learn to live with them). He emphasized more than a few times about the progress he made in his life – getting over drugs (he admitted to using just about everything), quitting smoking (for the sake of his daughter) and taking up martial arts (strengthening his mind, body and soul). Whereas many proclaim their bodies are temples, he unabashedly reminded us that they can be amusement parks and we should enjoy the ride, with all the good and bad that comes with that sentiment.

Anthony Bourdain has a wide following of fans and respect (though not without his share of critics for his more controversial or adversarial statements), so I’m hopeful that time as the ultimate judge will hold him in high regard. My humble take away from him is that you should meet everyone, try everything and go everywhere – even if it’s a bad experience, at least you can say you met them, tried it or went. The opportunity and time to explore, interact, experience and learn is always worth the effort – ALWAYS. This is a huge lesson I’ve learned in my own humble travel experience. So, if you don’t know anything about Bourdain, find a comfy chair and read Kitchen Confidential cover-to-cover or binge watch some episodes of No Reservations – you won’t be wasting your time.

(1) On a side note for anyone who may be wondering about my blog, I’m ever-so-slowly endeavoring to draft entries regarding my month-long Europe trip when I was a teenager. The long delay comes from needing to wrack my previously-described shitty memory of those days, trying to carve out time to write (not easy when chasing a toddler around the house), and seeking to invest in a decent scanner for an intimidatingly epic pile of old photo negatives sitting in my desk drawer. I expect to have these entries completed and posted sometime before I die or Hell freezes over, whichever comes first.
(2) Though thanks to my own inhibitions, I admittedly have my limits…some life experiences I’m more than content to leave to my imagination.

One thought on “Passing Influences”